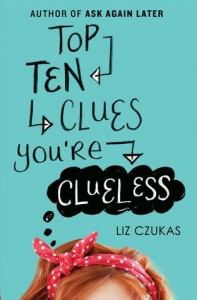 I never tried Liz Czukas' books before this one, but I can say I am a fan now and will be checking out her other books in the hopes that that one will be as awesome as this one!

What do you get if you stuff 6 teenagers in one supermarket on Christmas eve due to them being under suspicion of stealing a lot of money from the donation box? Hilarious and interesting situations, friendships and romances blooming and secrets revealed. I thought it might get boring, but thankfully it was all interesting and I had so much fun reading about the characters.

Our main character, ah I loved her, she was interesting, fun and I loved her lists. I spend a lot of time laughing at all her lists and how she was trying to cut on making the lists (which pretty much failed since she kept making lists in her head). She has a big crush on a boy and tries all kinds of stuff to make sure he knows. Which of course, all pretty much fail.
She is also diabetic, and I found that an interesting thing to have added. Especially since she doesn't want people to know, but I think she should have told them. Everyone was spilling their guts and telling stuff and she kept such an important thing for herself. And readers know what happened because she didn't want to tell/bother people with it.
But besides that little thing I really liked her. And I didn't mind her attitude towards her mom that much. I can imagine that a teenager doesn't want her mom to be fussing over her constantly because of her diabetes.

All the other characters were wonderful. I don't think I have a favourite out of them. At first I didn't like them. Zainia was cold, Sammi was just bleh and Gabe was just annoying and frustrating. But then we started learning about their things and we find out why they act like they acted. And then you start to really like them and cheer for them all. Hoping that really none of them had to do with the whole money stealing thing.

The only characters I didn't like were the owner and Kris. Kris was mostly due to events happening in the book, and the owner was just shitty from the beginning. And I am not sure, but isn't it kind of illegal to lock kids up in a room because of accusations? Maybe if the police could have gotten there immediately it wouldn't have been that big of a problem, however they have been stuck for hours.

I loved the ending. From fluffy/mystery/comedy to action and sensation. It was a wonderful way to end a book. Though that was not all, certain events at the last few pages just had me cheering.

All in all this is one book I would really recommend to all! You will laugh out loud, swoon, fangirl and cheer!