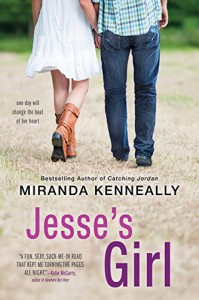 4.5 stars. This was a really sweet, adorable book with really likeable characters!

It just has everything that anyone would want in a book. Cute romance (which start off at the wrong foot, more on that later), music, running away for a day and having a great time, friendship and much more.

I was delighted that the romance didn't start off immediately. While I don't mind it happening, it is refreshing that it isn't instant love, but instead starts with quite a bumpy start for the two of them. I must say that I laughed so hard, since Maya is one girl you don't want to screw with, she has an arsenal of words ready, though you can also see underneath the words, and underneath the awesome clothes (yes, I really loved them, finally a main character who isn't dressed in standard attire), there is a girl there who was quite a bit shattered with how Jesse acted the first time. But then again, I can also imagine why Jesse would act this way. I can imagine that if you are popular and you know that fans can get a bit (well, ok, a lot) extreme, that you won't be happy that when you think you have the room to yourself that you find yourself looking at a girl.
Of course Jesse could have used some tact and not immediately have jumped to conclusions that Maya is a stalker or a scary fan.

But after that bumpy part, and some other bumpy parts in the first day, you could just see the sparks flying and I was just squealing in happiness. Jesse and Maya do really match together so well, they are great together and I was just dancing around from happiness.
Of course at times I just wanted to shake both Maya and Jesse for being complete idiots. Due to experiences they both had they are distrustful and also in Jesse's case, he jumps to conclusions. I can imagine why, but I still just wanted them to get together and try it out. Not immediately say no.

The first day (the day that Maya was supposed to shadow Jesse) was terrific and I just laughed so hard at a lot of things, and I was also delighted to see them opening up to each other. Jesse helping out Maya with her guitar and her vocals (which she apparently needed). Those shadow days sound pretty awesome, even if you get a dud as a day, it must still be fun to do something else for a change, and who knows, maybe you get lucky and have a fantastic day.

Maya was a great character, and like I said, I loved her sense of clothing, it is a style I also love wearing at times, so I was just cheering happily. Often characters just wear jeans/skirt + t-shirt/top, so this was refreshing, also considering that if characters wear clothes like Maya, they are often stereotyped as goth or emo or something else in that category. Maya on the other hand is just a normal girl who loves rock and singing and guitars.
Though not only that, I loved that she adored cars and bikes. It is something I also adore so I could relate to the girl and every time she squealed for a great bike or a car I was squealing as well.
I loved how hard she worked on getting somewhere, a lot of people might have given up, but she had so many people motivating her, and her own motivation was huge, it was amazing to see her fight to get somewhere.
I loved her with Jesse, she was able to throw back words to his stuff, she was able to listen to him, to care for him, she wasn't that much fazed by the fact that he was a superstar. A lot of people might feel unworthy, or try to grab this chance to get somewhere themselves, but not Maya. Oh no. She was terrific with this kind of thing.

Jesse, ah Jesse, such a wonderful and sweet guy and I felt so sad for him a lot of times through the book. Super star, it sounds so fantastic, it sounds like the life everyone would want, but instead it is causing Jesse quite a bit of trouble, not only with the fact he can't go outside without guards/escort, but also with his family. At times I just wanted to hug him and tell him things would be all right, that he would find a place he belongs, that he would find more happiness.
Of course, at times he was just mean or rude, but as we slowly find out more and more about his past, I just couldn't be angry with him.

The competition and what happened there. Wow. I won't say much more, as that might spoil things, and I don't want people to know what happens there.

I was also delighted to see Jordan back again in this story! Yay! And also references to other characters. It is always fun when characters come back, or are referenced back. It gives the book an extra spark and makes it extra fun to read. :)

The story was really and I enjoyed it a lot. Lots of music, references to good music, a bit of drama, quite a bit more of romance and much much more!

I saw that there will be more books about Hundred Oaks in the future, I can't wait, hopefully they will all be great and I hope that we will meet older characters again.